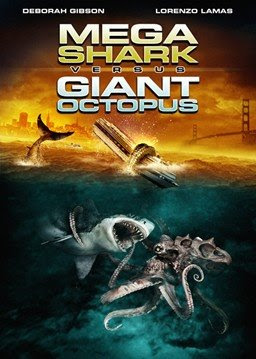 Taking the lead from Japanese kaiju eiga -- where you describe the main attraction of the movie in the title -- The Asylum's latest creature feature offers 'em up very big indeed, if the image on the cover is anything to go by.

The California coast is terrorized by two enormous prehistoric sea creatures as they battle each other for supremacy of the sea.

If it delivers on those promises, I'm there!

Posted by Undead Brainspasm at 1:32 PM