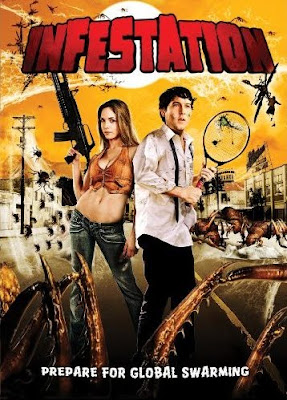 Giant-sized insects swarming. And there's not enough bug spray in the world to deal with them. Infestation (US-2009; dir. Kyle Rankin) premieres 8 August on SyFy in the US, and on DVD in October.

Our hero, Cooper, awakes to find himself nauseous, weak and covered in webbing, hanging from the ceiling of an office where, just minutes ago, he started his new job. As he struggles out of his slimy prison he comes face to face with his opponent - a grotesque, powerful and very angry bug. All 3 ft of it. And so begins a hideous, nail-biting, comedic, all-action adventure to find a safe haven while constantly outwitting an infestation of monstrous proportions. As Cooper embarks on his journey, he befriends a ragtag group of survivors including Sara, a feisty attractive female. Although the situation is dire, Cooper can't help himself from trying to solve his dating problem while trying to save his life. Will they make it to safety before they are picked off one by one? And what other surprises are in store for our group of unlikely heroes? (IMDb)

Below there's a bunch of pictures, mostly featuring star Chris Marquette with his mouth open. No giant insects unfortunately, mouths open or otherwise. 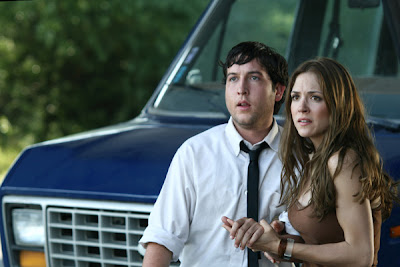 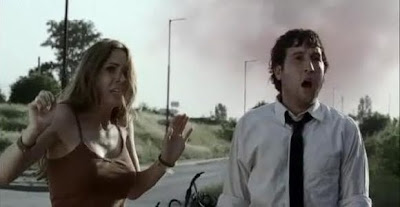 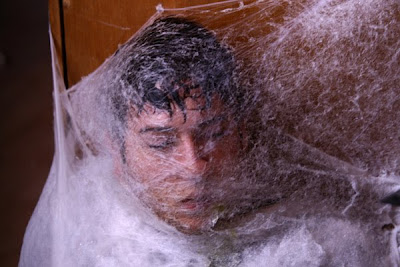 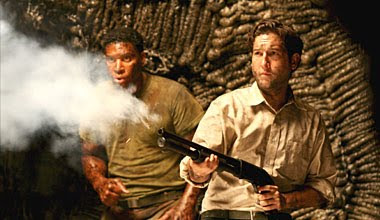 This one actually looks pretty good, despite the inevitable comedic approach. Check out the trailer on Undead Brainspasm.

Incidentally, is that tennis racket Marquette is holding in the poster above the US version of Simon Pegg's cricket bat? Shaun of the Dead was a zomromcom -- and this one looks like an insectromcom. Substitute zombies for insects and the plot sounds very similar. Coincidence?
Posted by Undead Brainspasm at 7:28 AM