Exclusive: The Night of the Chupacabras

The chupacabra is a cryptid with a territory that centers on Latin American countries, particularly Puerto Rica and Mexico, though it has been sighted in the US as well. The name is Spanish and derives from two words meaning "goat sucker". Yes, it has a habit of drinking the blood of livestock, especially goats.

The chupacabra featured in the X-Files episode, "El Mundo Gira" and came up against the Scooby Gang in the film Scooby-Doo and the Monster of Mexico. There have been several independent films featuring the legendary critter -- such as El Chupacabra (UK/US-2003; dir. Brennon Jones, Paul Wynne); Chupacabra Terror (US-2005; dir. John Shepphird); the Troma flick Legend of the Chupacabra (US-2000; dir. Joe Castro); Guns of El Chupacabra (US-1997; dir. Donald G. Jackson); Night of the Chupacabra (US-2005; dir. Ted Rivera), a sci-fi parody that interprets the chupacabra as an alien; and assorted other low-budget efforts. Coming up in 2011 is, apparently, a studio-based US horror thriller titled Chupacabra, starring Billy Zane, Daniel Stern and Daryl Hannah.

Cryptid Hunter Avery has located an interesting-looking Brazilian film featuring the Chupacabra, titled A Noite do Chupacabras (trans. Night of the Chupacabras). Directed by Rodrigo Aragão, it tells the story of a family feud sparked by something monstrous lurking in the jungle.


A young couple returns to their land of origin in the interior of Espírito Santo in Brazil, a journey through forests and mountains full of mysteries, legends and natural beauty. Douglas Silva (Joel Caetano) finds his family upset over the mysterious death of their farm animals and old conflicts that have long plagued the area's rival families resurface. The Silva brothers are increasingly certain that the deaths were orchestrated by the neighbouring Carvalho family. However, Douglas' father knows that something more sinister lurks in the woods. With the families at war, they are faced with an evil greater than they can imagine. Between fights, chases, hunts and lots of shooting, the mythical creature, the Chupacabra, reveals itself for the first time. (Source)


Here is the teaser trailer:


Aragão's previous film was Mangue Negro, or Mud Zombies (2008), in which pollution of the local mangrove swamp causes zombie-like creatures to rise from the waters and do that thing that zombies do. (Source) 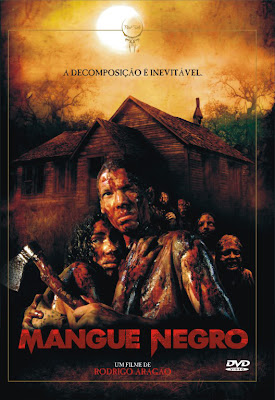 The Night of the Chupacabras, produced by Fábulas Negras Produções, is currently filming, and aims for a release date of July 2011. It is expected that it will have Spanish and English subtitles like the previous film.

Below is a gallery of images from The Night of the Chupacabras, showing the location, the cast and some nudity and gore, but not the monster. Producer Mayra Alarcón told the Backbrain that "the appearance of the Chupacabras is being kept a secret until the debut of the film. It will be our surprise for the public." Director Aragão, who wrote the film, also designed the creature.

Note that, according to Alarcón, "the image that looks like a zombie is our Man with a Sack [that is, O Homem do Saco -- a version of the Bogeyman], a Latin myth about an old man who kidnaps children". 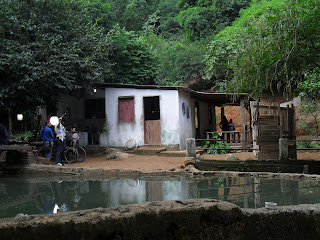 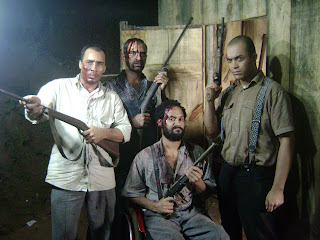 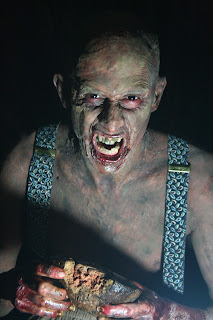 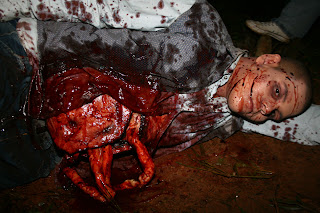 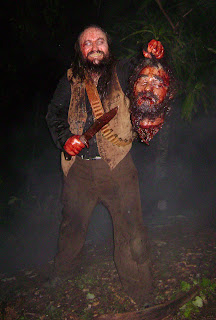 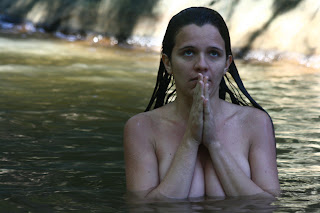 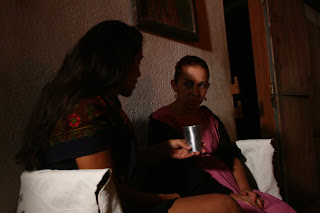 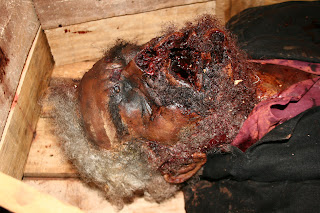