Tale of a Long-Awaited Empire

In 1982 the first really memorable sword-and-sorcery film I recall seeing (when I was young and impressionable -- and I'm not counting earlier stop-motion monster adventure epics from Ray Harryhausen, such as The Seventh Voyage of Sinbad) was released. The Sword and the Sorcerer (dir. Albert Pyun) predated Conan the Barbarian by only a few months. It was comparatively low-budget -- but I didn't care; magic, demons, icky ancient sorcerer, three-bladed, bolt-shooting sword and provocatively dressed women. What's not to like? And the coffin made of screaming skulls looked pretty cool to me.

Then there was magical heart surgery:

The end of the film promised a sequel with the title Tales of an Ancient Empire, but over the ensuing decades the ancient empire failed to rise.

Now director Pyun has a surprise for us. Tales of an Ancient Empire is currently in production, the actual shoot having begun in December last year, with the film scheduled for a 2010 release. 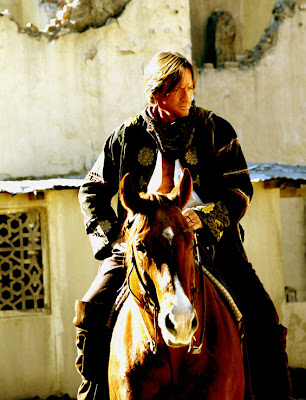 Posted by Undead Brainspasm at 1:18 PM