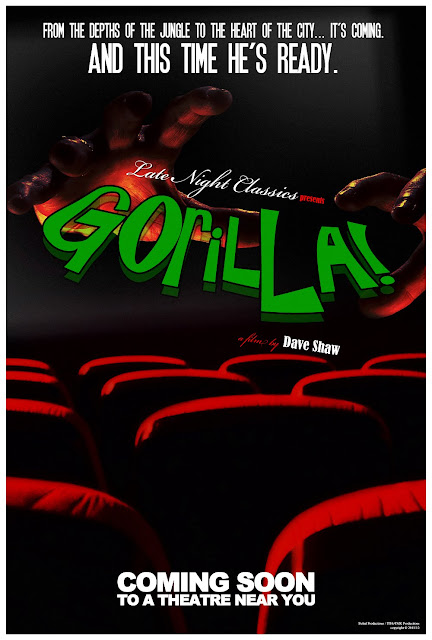 Rise of the Planet of the Apes notwithstanding, guys in slightly tawdry gorilla suits remain an ever-popular feature of ... well, those late-night horror shows we all grew up with and remember fondly.

"I've always had a love for 50s and 60s B-movies," Shaw (pictured below) told Undead Backbrain. 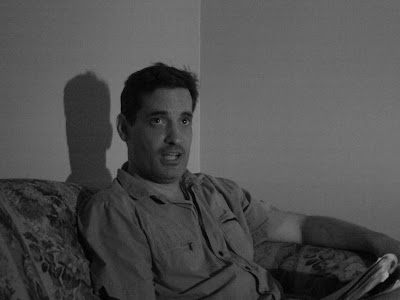 "The kind where the monster was a radioactive mutant of some sort or horrific beast (such as a gorilla) who would jump out of the shadows at delicate sweet young things while a stoic, square-jawed man of action attempted to defeat the beast.

"These were the black-and-white epics from such filmmakers as Samuel Z. Arkoff and Roger Corman and, shudder, Ed Wood, that kept teenage drive-in goers riveted way back when. I also have a love for the comedies I grew up on in the 80s -- from directors like John Landis (as a tribute, there is a bumbling cop named Officer Landis in my film), who made National Lampoon's Animal House, The Blues Brothers and Three Amigos! amongst others, as well as The Zucker Brothers of Airplane! and Naked Gun fame.

"With Late Night Classics presents GORILLA!, I've set out to marry the two genres. It's a black-and-white comedy about a young lady who must turn to some Rat Pack- obsessed elders to help stop a gorilla who is attacking all her friends. Yes, there are some horror elements, but we're more interested in giggles than gore with this one."

Asked about his own background, Shaw explained:


"As for myself, in the early part of the century, I hosted a television program called "Condensed Classics with Dave Shaw" playing a sleazy lounge-lizard type who hosts old black-and-white monster movies with a different cocktail dress-clad starlet each week. The show ran and reran (and reran and reran) for a period of close to eight years on Movieola The Short Film Channel and its partner station Silver Screen Classics.

"Currently, I work at Ottawa Little Theatre managing Front of House and Customer Service. I love it there and being around such a creative environment revived my creative instinct. Could I write and direct a play? Hell, no. I would have no idea what I  was doing. But could I write and direct a movie where one of the supporting characters was a sleazy lounge lizard former TV show host? That I could do! With the help of Julian Adderley, my trusty co-producer and editor (he also served as editor for "Condensed Classics") a GORILLA! was born!"

One thing the production still needs is money. Said Shaw:


"We are always looking for more investors. An investment of $20 or more gets an on-screen Executive Producer credit. We have raised a good chunk of our budget this way and will continue to do so as we head into post-production."

Learn more about the film on its official website/blog. 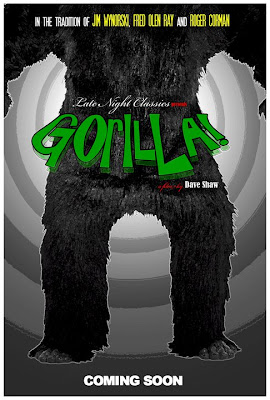 Addendum: A New Featurette
Posted by Undead Brainspasm at 10:41 AM