Ever heard of Zaat (aka The Blood Waters of Dr Z, Attack of the Swamp Creatures and Hydra)? Well, it's a creature feature from 1971, directed by Don Barton (with uncredited assistance from Arnold Stevens, according to IMDb)* that is a delicious mix of classic mad scientist and mutant catfish hybrid imbued with a passion to pollute the entire "universe" (Don't blame me, that's what it says!). 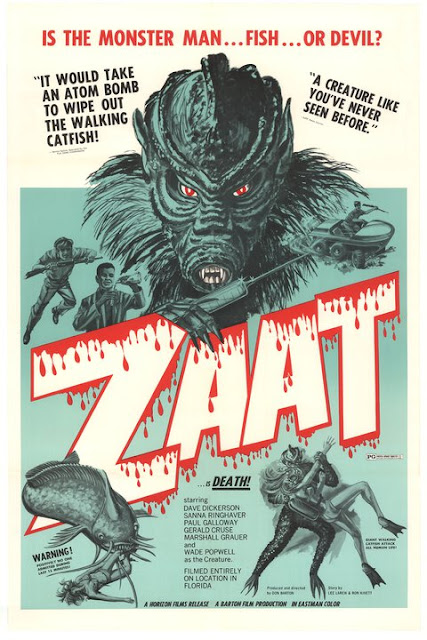 The Backbrain has just received news that not only will you be able to buy a 40th Anniversary special edition of the film in mid-December, just in time for Christmas, but also director/producer Barton now feels ready to make the sequel that fans have, he says, been asking him about for years. Barton will make the formal announcement and unveil preliminary plans at the ZAAT 40th Anniversary celebration at the Five Points Theatre in Florida this Sunday, October 23, at 7:30pm. It will follow the showing of the original Zaat movie which was filmed entirely in and around Jacksonville, Florida. Barton is not divulging any details except for the title, Darn Monster. According to Barton, a "short video will show where we're headed with the fun story".

Based in Jacksonville, Barton was recently recognised by the Jacksonville Film Commission for his lifetime contributions to the industry.

Tickets are available on-line all this week on the Five Points Theater website. Seating is limited and will be on a first come, first served basis.

As for the 40th Anniversary DVD of Zaat, it is being released by Synergy under their Cultra label.  It will be a DVD/Blu-Ray combo pack and among other things will contain a feature-length commentary with several of the cast and crew.


You can also catch three TV Spots on the film's YouTube Channel.

Addendum: we have received the following information straight from Don Barton, commenting on the supposed role of "Arnold Stevens" in the making of the original Zaat as well as the alternate titles associated with the film:


Here is some somewhat exclusive information for you since I see that this article perpetuates some misinformation that has surrounded ZAAT for years.  First of all, Arnold Stevens does not now and to the best of my knowledge has never existed -- at least not in connection with this film which was directed entirely be Don Barton. In the 1980s, Barton approached Vestron Video about releasing the film on home video and gave them a screener tape made from a worn print of Blood Waters which had seen better days.  He was turned down but a short time later the film appeared on one of Vestron's subsidiary labels, Lightening Video, in the Elvira movie series with falsified credits and the new title of Attack of the Swamp Creature.  All original cast and crew information had been replaced.  Hydra is another bootleg home video title that replaced the opening title card on a print of Blood Waters but kept the rest of the credits.  By the time these two misappropriations had been discovered, both video companies were long out of business and there was no one left to sue but these unauthorized products are still used to this day to unfairly represent the film ZAAT. The Attack title is particularly annoying because the print is very dark and damaged and the credits are incorrect but often quoted as factual in reviews and articles.  I hope you can make use of this information.

Posted by Undead Brainspasm at 1:43 PM