How to put a new spin of the dinosaur movie: concentrate on their descendents.

Transformers producer Don Murphy has optioned a novel, The Flock, by James Robert Smith that features "a group of highly intelligent giant prehistoric birds discovered in the Florida Everglades who are intent on protecting their ancient home when faced with encroachment by theme park developers" (Hollywood Reporter) 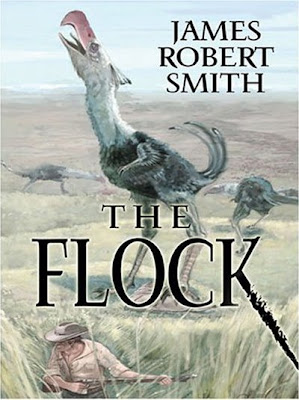 I like the story that Hollywood Reporter recounts about how Murphy became interested in Smith's book. Apparently Murphy was on Eddie Campbell's blog talking about Campbell's graphic novel From Hell, the film version of which Murphy had produced.

Smith was posting comments critical of the film, putting Murphy on the defensive. Eager to find out more about the poster, Murphy discovered Smith had written a book. He quickly ordered it, expecting to hate it and ready to trash it. To his surprise, he fell for it.

Anyway, Murphy considers that this will be a "summer tentpole" movie.

Posted by Undead Brainspasm at 7:58 AM