I've always thought that if you're going to remake some old genre film, it's best to remake one that exists down the bottom rungs of the ladder, even (or maybe especially) if it's got a cult following. With remakes or sequels of B-flicks such as Attack of the Giant Leeches, The Horror of Party Beach, Fiend Without A Face, The Killer Screws [see the just announced Return of the Killer Shrews], The Swarm and Kingdom of the Spiders either recently made or announced as in production, surely the time is right for a remake of one of the most ludicrous franchises ever:

... and then, as if those weren't enough, Killer Tomatoes Strike Back! (1990) and Killer Tomatoes Eat France! (1991), both still directed by Mr DeBello. On top of that there was an animated TV series, assorted video games, comic books, toys, merchandise and endless tomato-sauce splattered hilarity.

Pursuing previous information that suggested that John DeBello and 'Ask A Ninja' were intent on doing a remake, Kaiju Search-Robot Avery hunted the parties down and got confirmation that DeBello and 'Ask A Ninja' were no longer collaborating on this project and that the Ninjas were no longer attached to it. Undeterred, Avery asked DeBello if plans for a remake of his most famous classic were still on the cards.


No updates that I can share at the moment, Avery, but stay tuned ... I guess if they can remake The Horror of Party Beach, then Killer Tomatoes should be a lock, eh? Alas, even vicious veggies fall victim to the vagaries of Hollywood deal making. (Are the Coen Brothers busy?) Anything is possible with Killer Tomatoes ... while a remake remains a tantalizing possibility, to paraphrase William Goldman: "Ya Never Know".

What would be his preferred options for the film if it happened?


My personal preference is a $300 million 3D version helmed by James Cameron, with me receiving a $20 million consulting fee and a brief cameo, but I always wake up from that dream just as I'm cashing the check.


Seriously, the Hollywood route is probably most appealing, if for no other reason than that it'd be fun to see a big-budget remake of a no-budget indie ... sort of fits the Killer Tomato dynamic of infinite absurdity. But again...

I'll be sure to keep you posted if/when the Vicious Veggies roll again.

So, you heard it here first. There might be a big budget remake -- and if you'd like to mis-read what we wrote and spread the word that James Cameron will be helming it, feel free to do so. Might make it happen. 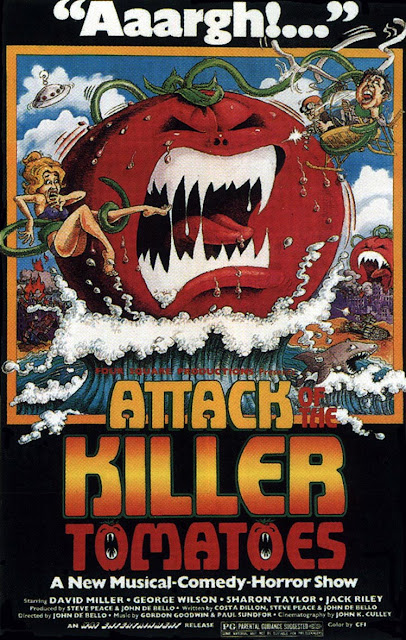 Posted by Undead Brainspasm at 7:10 PM No comments:

Update: The Night Of The Chupacabras

We thought The Night of the Chupacabras [A Noite do Chupacabras] (Brazil-2011; dir. Rodrigo Aragão) looked like a lot of fun when we came across it back in January (see earlier Brainspasm article), what with all those gorily extreme images and the generally weird ambiance. But that was nothing. Check out the newly released official trailer below. Things start out looking normal enough, but before too long normal goes right out the window, as a famous cryptid is reborn in order to encapsulate the evil energy unleashed by family rivalry. ...

The Night of the Chupacabras was produced by Fábulas Negras Produções for a July 2011 release date.

via Avery Guerra. Written by Robert Hood. For a full listing of cast and crew, and lots of pictures, go to the above mentioned Brainspasm article.
Posted by Undead Brainspasm at 5:48 PM No comments:

Director Jesse Blanchard has sent Undead Backbrain the first teaser trailer for his "ass-kicking, fun-to-watch" monster flick Chompers 3D, which we featured on Undead Brainspasm in February. The trailer is in 3D, so you'll need some two-colour anaglyph 3D glasses. If you need guidance in this regard, visit the Chompers 3D website, where you can learn how to get some.

The central concept -- of a creature that "starts out very small, hiding as a ring or a thimble, always something round, waiting for a victim to place her hand inside his mouth, but each time he feeds, getting a little bigger and a little better at camouflage" -- is a great one with terrific potential for a cult-fannish future, along the lines of films such as Gremlins.

Source: Jesse Blanchard via Avery Guerra. Written by Robert Hood.
Posted by Undead Brainspasm at 8:28 AM No comments:

Exclusive: In the Devil's Courthouse

The title In the Devil's Courthouse conjures up lots of things, but that the film might be a classic cryptozoological creature feature wasn't at the forefront of my thoughts on the matter. 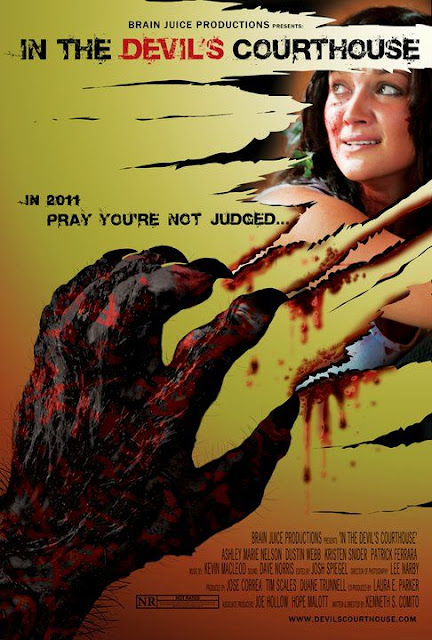 
It lives on this mountain. On The Devil’s Courthouse. The Cherokee people knew of the evil that lurks there. They carved the story of the beast into stone for all to see and to serve as a warning throughout the ages. A warning that too many have ignored for too long. Now, the beast has emerged from the darkness... and it’s hungry. Unfortunately for Leah and her newest boyfriend, Josh, they’re about to find out the terrifying truth behind the legend. Soon after their camp site is attacked, Leah makes a desperate phone call to her brother, Steve, while running for her life. Steve rushes to the rescue with his girlfriend, Lauren, and Max, a fellow police officer. After tracking his sister for hours, the group is thrown into a terrifying struggle for survival as the “Devil” judges their souls and decides which of them will live and which of them will die. Can any of them survive the nightmare in the woods at the Devil’s Courthouse?

On the other hand, that it might involve a lot of blood was always on the cards. The devil's just like that, you know. Judgemental in the extreme. And not prone to being just. 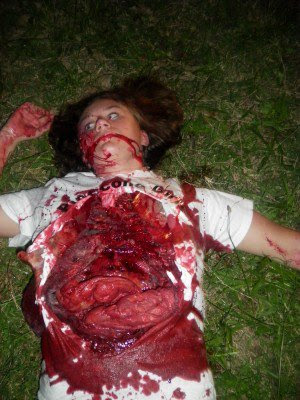 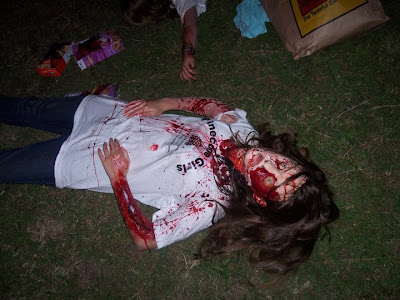 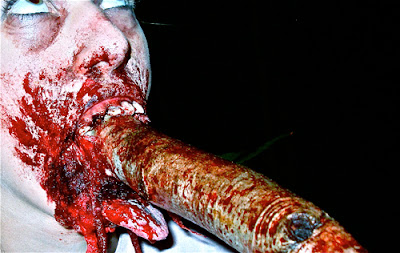 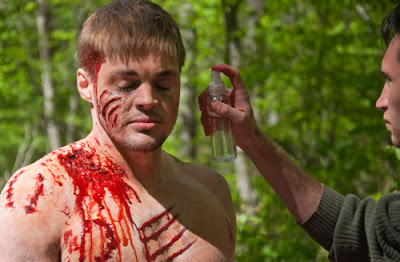 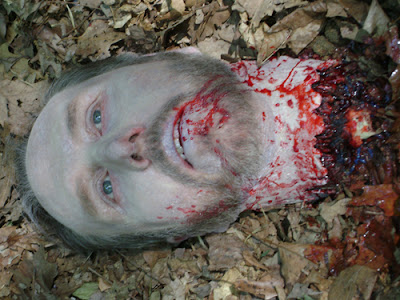 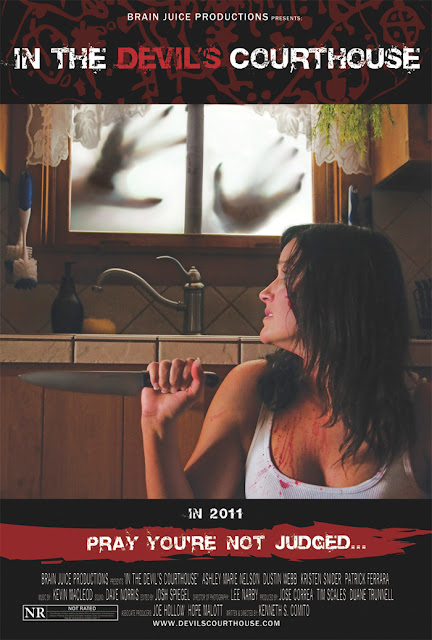 Made for Brain Juice Productions by writer/director/producer Ken Comito, In the Devil's Courthouse is in the final stages of post-production, with Comito shooting some add-on footage and tweaking some technical hitches. He expects the film to be released later in the year.


Although it was conceived and written using the “cabin in the woods” or “come to me” formula for simplicity and with budget in mind, the screenplay and subsequent production of In the Devil’s Courthouse quickly evolved beyond either of these two structural definitions. This was in part due t necessity. The simple, budget-friendly, one location aspect of the “cabin in the woods” formula became more complex as the interior of the primary “cabin” location was too small to accommodate cast and crew. We had to plan for a second “cabin” for all interior shots and some exterior shots. The number of exterior shooting locations also quickly multiplied. We found so many beautiful locations, from the Pisgah Covered Bridge in Asheboro to numerous locations at Hanging Rock State Park and along the Blue Ridge Parkway in the Appalachian Mountains, that we had to incorporate them into the movie. (Press release)

The main cast is:

Below is a prop from the film, a map showing "the Courthouse": 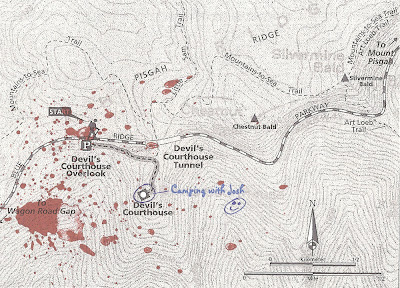 More information (and lots of production stills) can be found on the film's official website. An interview with the director appears on The Times News.
Addendum: Old Teaser Trailer:

Posted by Undead Brainspasm at 5:40 PM No comments:

What's on the Other Side?

Actor Joe Flanigan clearly has a penchant for going through portals of one kind or another. He did it a lot in Stargate: Atlantis and now it's happening again in a creature feature flick from SyFy Channel supplier RHI Entertainment. 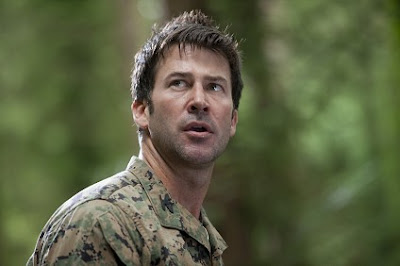 This time Flanigan has John Rhys-Davies (doing his best to look senatorial rather than dwarvish) and Dagmar Doring along for the ride. 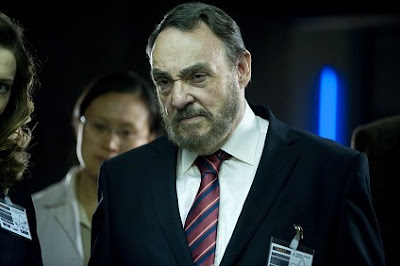 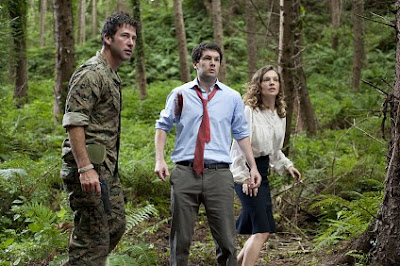 
It was a groundbreaking device designed to glimpse alternate universes and government commissioned by a brilliant physicist. But the machine malfunctioned on its first presentation, transporting a group of observers into a nightmarish new dimension. The team quickly must use ingenuity and courage to outwit, outplay and outlast the native man-eating creatures of this bizarre new world while doing their best to repair the damaged machine. Even if they stay alive, without a working transport, they may never make it back home.

Posted by Undead Brainspasm at 6:26 PM No comments:

Labels: John Flanigan, John Rhys-Davies, monsters, SF, the other side 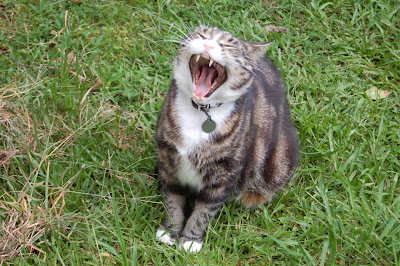 Well, two weeks is up, Pazuzu has made his selection and I'm pleased to announce that the winners of the Blarghaaahrgarg DVD Giveaway are:

Alex DiVincenzo from Massachusetts, US
Susan Pearson from London, UK
Joshua Reynolds from Pennsylvania, US
Hayes A. Jones from Louisiana, US (not Los Angeles)
Luís Cláudio Lopes da Silva from Tondela in Portugal

Congratulations, people! I will be sending your addresses on to Fernando Alle and the folk at Clones Productions in Lisbon and a brand-new copy of the Blarghaaahrgarg DVD will be squirming its way to you as soon as possible.

Thanks for taking part in the give-away -- and many thanks to Fernando and Clones for their generosity.
Posted by Undead Brainspasm at 8:26 AM 1 comment: