Thoughtful Dead.... Zombies who always send you a card on your birthday? Who always wash the dishes after dinner? Who let you watch to the end of the movie before they eat your eyeballs? Who let you pee before sending you off into the afterlife (where, of course, there are no toilets)?

Thoughtful Dead: The Good and Evil Dead (directed by Ira Cooper) is a short, 10 minute zombie noir film about a zombie, aptly named Brains, who unlike his fellow undead, has retained his ability to think. 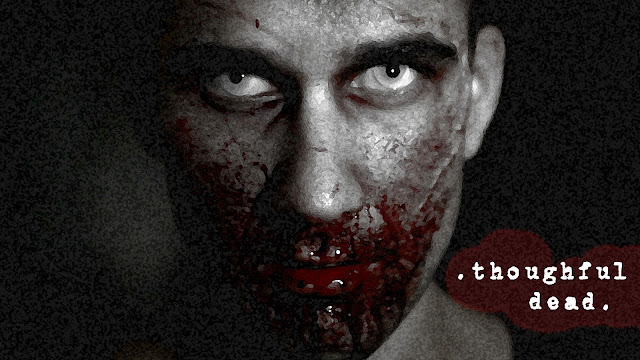 "The walking dead do not think," Cooper explained. "They are vermin, an infestation, an annoyance. Brains is possibly the only of his kind who can think. Unable to relate to his undead comrades or speak to people, who see him as a detestable subhuman, he is trapped within his own thoughts, his own internal conversations and a landscape of towering piles of books."


Okay, a thinking zombie? Not quite like a sparkling vampire, but what's the point? Cooper sees the concept of cognizant zombie to have significant metaphorical applicablility.


The idea of a thinking zombie comes from a very true place. Without getting into specifics, there are a plethora problems all around our globe now that fully cognitive and aware human beings are causing or letting happen. Brains, the thinking zombie, hates his own kind for their destructive nature, and yet that is just it -- it's simply their nature to do so. They don't think about killing, they don't pre-conceive destruction, they have not a single forethought. Brains holds up human beings on a plateau and yet when it comes to evil deeds that Brains detests about his own kind, humans are the only one's who can think and are therefore accountable for their actions. So you might say this is a film about the responsibility we have to our world and to others, to be able to think and act on our thoughts. In Brains' universe, zombies are a minority -- slow, thoughtless and easily spotted. The analogy there is obvious and yet it still happens in the smallest ways, where our perception of a group of individuals is jam-packed with pre-conceived notions based on folklore and stereotypes.

Cooper describes his approach as noir, by which I assume he means shadowy and dark. When we asked, we found it was not only the typical noir film's basic aesthetic he was referring to but also the classic embattled Chandler hero.


Why noir? Well, Brains is stuck in his own head, quite literally, and what better classic gimmick than the ol' loner detective running narrative. Using that convention, I am able to have him converse with himself, as well as speak in a heightened era type of speech, lending itself to his outcast persona. Brains is not the reinvention of the wheel, no, there have been many Brains before. This is just a stylistic tweak on the archetypal tortured soul, in that this victim of circumstance has no soul.


Clearly though it's not all metaphysics. When asked about the production itself Cooper explained that it was being produced by Tape Mouth Films, and that "the cool effects" were variously done some post and some in camera. "All the scars, makeup effects, shot gun holes etc. were designs and put together by my brilliant makeup team," he added. "The flying blood from gun shots, pistols and a lot of the lighting compositions was done in post by me."

Cooper says of himself:


I started off as a little kid with a grandiose imagination who wanted to act. I took every acting class I could find in my city, went to theatre school in University, worked in local theatres here and around. I realised it was the creative forces behind the actors, the words that they say, the scenes that they were stuck in, that I wanted to be a part of.

[My earlier work] was a lot of absurdist comedy. That is what I liked creating in the theatre world, looking to writers like Alfred Jarry and Nickolai Gogol for inspiration. It was the same for my film-world inspirations. I was intrigued by the boundless, limitless ideas of auteurs like Buster Keaton, Luis Bunuel, Guillermo Del Toro and Orson Welles to name a few. I made shorts with my friend Angel under Fortunato Films for short film competitions, with titles like Time's A Dick, Bird Poo, Talk Block and The Immigrants. I also delved into the world of comedic horror, making films such as Ghoulfellas (Best Script), Green Streets and Raging Bieber for the Bloodshots 48 Film Festival.

I started to want to make films more obscure, more Mel Brooks, more off the wall. I wrote and shot a few veiled satires such as Anti Porn, a film about the over-sexualization of relationships and the responsibilities of "being in the moment." I've screened this film many times. It has a few fans and A LOT of polite people approaching me after watching it, saying they had no clue what was going on. I also completed a film dealing with our perception of homelessness, which is very swept under the rug topic in Vancouver. I'm also an avid cyclist, who is working on a film about positive globalization through shared experiences, couch surfing and travel.

As you can probably tell, I like to write and find it hard to place a stopper at an appropriate point. I never wanted to make a career out of film. There are just too many nasty associations that come along with tainting my love of it as a career. I enjoy working with local filmmakers with no budgets, to evolve ideas as a collective and to make wonderful stories to entertain whoever is willing to watch. I make art so that the audience and artists can benefit and that's the whole concept behind self-financing and self-promoting my own films. I don't promise my crew a simple DVD copy for all their hard work or that I will try to get it into festivals. That simply isn't good enough.

In this day and age, it is more possible than ever to find creative ways to get your film out there and self distribute. That is my goal with Thoughtful Dead: The Good and Evil Dead -- to get it seen by as many crazed zombie aficionados as possible. That is my inspiration to keep making films, the possibilities that the films in their very nature encapsulate the vibrant human spirit that every soul I work with exudes and puts into each project.


Crew
Cast
There are also a slew of extras and people who assisted me with this project as well: