While there's been no visual sighting of the giant monster involved, Bob Nelson's in-development monster film Sacrifice is apparently stomping along in fine style. Tomorrow, on the film's website, there will be an open live chat on the movie's progress, where you can ask the questions that are preying on your mind.

Meanwhile Kaiju Search-Robot Avery reports that the first official teaser poster has been "leaked" to him, and here it is: 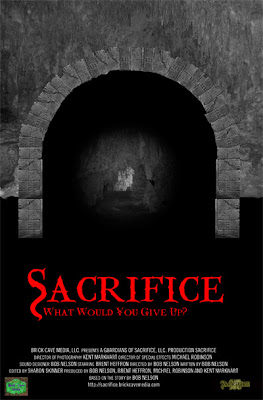 The poster will be available for purchasing from the site.

At the same time, Brick Cave Media is releasing a new story, "Origins", which reveals the monster's backstory. It will be available for purchase -- or comes free with the poster.

As if that's not enough, a short (5 minute) film called "Convention" (Bob is keen on single-word titles obviously) will also debut on the night. It's a spoof of the "Sacrifice" crew's struggles to get their film made.

So roll up and Sacrifice yourself to the excitement.

Posted by Undead Brainspasm at 6:15 PM