Exclusive: Get on Ya Camel (Spider) and Ride!

Camel spiders -- you know, those nasty-looking spiders that have been one of the lasting B-grade legacies of the war in Afghanistan and Iraq -- get big in Jim Wynorski's latest non-T&A epic, Camel Spiders (US-2011; dir. Jim Wynorski).

Camel spiders are real, but have become the subject of a huge number of myths, especially after the following picture did the rounds of the blogsphere: 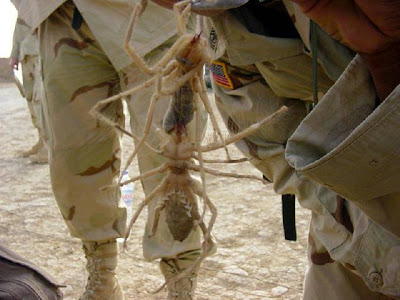 Big, eh? In fact, if you check the size of the barely visible hand holding the dead spider, it's not so big -- its apparent size being the result of forced perspective. Here is a neat list of current myths about camel spiders (collected on camelspiders.net):
In reality, camel spiders, which are not actually spiders as such but Solifugae and thus part of the Arachnida family along with spiders, scorpions and the like -- have a max. leg span of about 12 cm (4.7 in), with a body length reaching 7 cm (2.8 in) (which is bad enough, I reckon), and they run at speeds of up to 16 km/h (10 mph) (which is still rather impressive). They are mostly found in deserts -- and not just in the Middle East and are also known as wind scorpions or sun spiders. Apparently they don't scream, disembowel camels, anesthetize humans in their sleep and eat them, or any of that fun stuff. (Source) 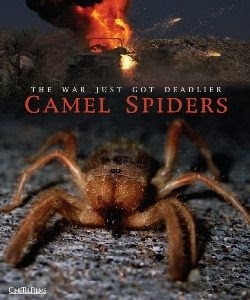 Wynorski's camel spiders will, of course, veer toward the fun variety rather than the real ones (only bigger), as shown in this early teaser for the film [note: at the request of the producers, we've been asked to remove this teaser trailer from YouTube. Sorry, folks!]:


Ah, they're always fun, are giant spiders, even if they don't get to daikaiju size. Something to look forward to on SyFy.


Based on actual creatures that for years have tormented our armed forces in the Middle East, these creatures have invaded the southwestern deserts of the United States. The Camel Spiders now freely hunt for prey, unafraid of any predator - including man. No place is safe no one is beyond their paralyzing sting. In the end, a small band of hearty fighters are forced to make one last stand against the creatures. (IMDb) 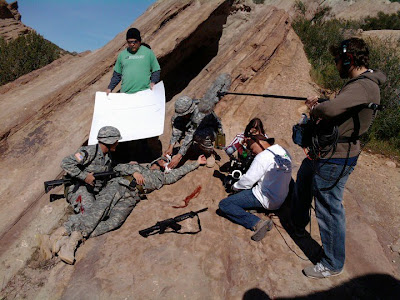 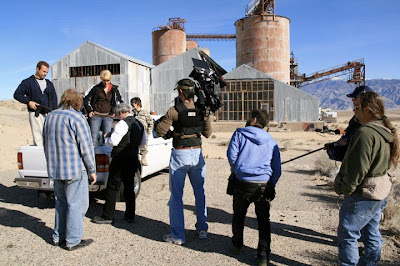 Posted by Undead Brainspasm at 11:29 AM

The myth circulating about their size, such as the they can grow as large as dinner plates, never disappear because of the infamous hoax image showing two camel spiders tied together. See more: http://www.camelspider.org

The thing most people don't see in that image is in the top right... That is the cuff of a sleeve, giving away the real size of these guys. It's almost a forced perspective illusion...