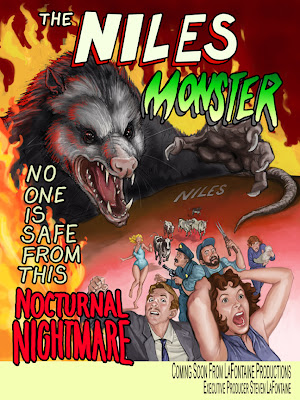 OK, folks, this is definitely a tease -- we don't even have a plot summary for this one. But you know, there's definitely something effectively creepy going on here:


What do we know? Not much. The film's called The Niles Monster, produced and directed by Steven LaFontaine.  It's coming soon. From all appearances it has a cryptozoological bent, featuring a monstrous beastie that's haunting the city of Niles, California (which happens to be most famous for being "the original Hollywood").

La Fontaine sees The Niles Monster as sitting in the tradition of the 1950s B-horror genre. He has  more to say about it in this clip from a local creepshow horror program, Creepy Kofy. Notably he says that as Milpitas has a monster (see Undead Backbrain), he thinks it isn't right that Niles, "the original Hollywood", doesn't have one, too -- and he plans to right that wrong:


For your information, the following gives you some idea of Niles' claim to being "the original Hollywood":


But it was the arrival of Essanay Studios in 1912 that truly put Niles on the map and in the history books as being the "first" Hollywood. Broncho Billy, owner of Essanay Studios, started making films in and around Niles. He shot over 300 films during the studios four-year run in Niles. Broncho Billy shot many train robbery and chase scenes in Niles Canyon and around the town of Niles. Actors Ben and Carrie Turpin, Wallace Berry and Chester Conklin were seen around and about Niles as they worked on Broncho Billy's films, but the most famous actor to grace its streets and history was Charlie Chaplin. The highly acclaimed "The Tramp" was filmed right in downtown Niles on Niles Boulevard. (from Travel Destinations tourism website)

Anyway, The Niles Monster is still in production, with some interesting developments occurring on a daily basis. LaFontaine revealed this bit of gossip:

We're close to getting a free special effect shot courtesy of a gentleman who let us film on the property where you see the armed search party. Can't give away too much info on that. However, I can say that it involves the demolition of two large brick towers. Should be fun to film. We may have to sacrifice a camera for the impact shot.

And he said this about the titular monster:


I've been advised that I should never actually show the monster. But I want the beast in the film. All of my favorite B horror films show the monster and the more jacked-up the better, although of course I believe in building suspense. I'm leaning towards puppetry and some CGI, depending on the scene. What it's like? Well, it's a quadruped (think An American Werewolf in London), and as to size I haven't figured that one out yet. But as you can see from the poster, it's a giant angry mutant opossum!

The website can be found here. And, yes, there's t-shirts for sale.

Posted by Undead Brainspasm at 9:34 AM