Exclusive: Journey to the Centre of the Tay

The Scottish giant monster spoof, Terror ‘Neath the Tay! (UK-2009; dir. Kyle Titterton) — which Undead Backbrain revealed in depth here -- was reportedly the first in a trilogy. Well, true to his word Kyle Titterton, the director, has sent us news of the first sequel, Journey to the Centre of the Tay, which he expects to be released in about three months' time. 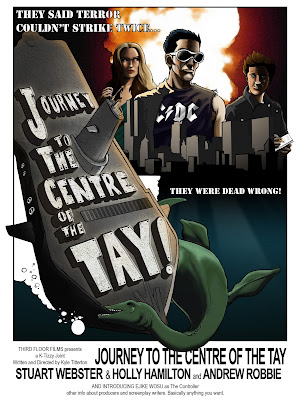 
As you can see from the poster the monster, this time is a plesiosaur -- like 'Nessie' from Loch Ness -- though seeing as it inhabits the Tay estuary it gets dubbed 'Tessie'. Because of this we managed to get media rights to The Drop Kick Murphy's song "Tessie" -- which is actually the official theme song for the Boston Red Sox! Daft but there you go... However, there is a brief cameo featuring the monster octopus from the first film...

Titterton told us that Tessie, when she arrives, will be created via CGI. He added:


I have some shots but I'll hold off till we're finished -- but she's looking pretty good. Overall the scale and scope is bigger though it'll still clock in around 45-50 mins, certainly under the hour mark. It does indeed form part of the Tay Thrill-ogy, the final part being: The Land That Tay Forgot! which I'll make if this one is at all successful.

It is taking a lot longer than I had planned though I think it's been worth taking our time as unusual opportunities have presented themselves -- such as getting hold of a tank, more ambitious SFX, as well as getting a few British celebrity cameos. We managed to get Lorraine Kelly to do a cameo.

Kelly, though "completely unknown across the pond" is "the Queen of morning talk shows" in Scotland.

Titterton is currently pursuing screening possibilities, including a North American premiere, and a DVD release. Undead Brainspasm will keep you informed.