For those who don't know, Kaiju Search-Robot Avery is this small, multi-functional AI who can squeeze between the narrowest of pixels and ferret out esoteric information on upcoming giant monster and zombie films with a flick of his optical-fibre antennae, especially where low-budget independent cheapies are concerned. (Mind you, he can make himself very big -- daikaiju-size -- without any trouble whatsoever and when he does you know the place is bound to end up as a heap of crumbling celluloid.)

Well, Kaiju Search-Robot Avery turned up at my backdoor this afternoon with his latest catch and dumped it right there on the mousepad.

It's called Attack of the 50 Foot Ghoul Girl (US-2009; dir. Brian Nichols) -- a short monster-on-a-rampage family-oriented creature feature that is currently in production.

Thanks for asking about our movie! We've been showing our homemade monster movies at the "Monster Bash" for about 5 years now. My girls have played the "Ghoul Girls" in several of our movies. This time around one of my daughters will become 50 feet tall -- sort of a take-off on Attack of the 50 Foot Woman. Our movies are really low budget but lots of fun to make (and hopefully watch). By the way, I'm the director and I'll be in the movie, too.

Known as a "Nichols Family Production", Attack of the 50 Foot Ghoul Girl will have its world premiere on Sunday, June 28th at the Monster Bash convention in Butler, Pennsylvania, where David "The Rock" Nelson is a regular guest of honor every year.

Creepy Classics Videos has provided a behind-the-scenes image of one of the miniature streets that the Giant Ghoul Girl will no doubt trash. 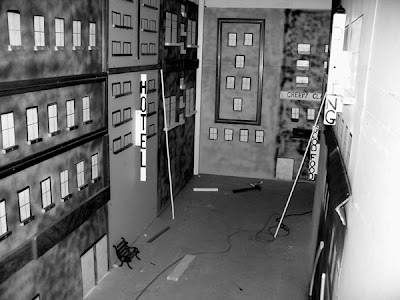 Says Brian: "This is the city street we're building. It has quite a ways to go before it's finished but this will give you an idea of what it's going to look like."

Good luck, Brian! I'm sure those who are able to attend with love it. Maybe you can put it up on the web afterwards so the rest of us can see it.

Posted by Undead Brainspasm at 6:57 PM

This looks like such a cool project. You gotta post it online when you're done. It's really amazing to observe how you plan it step by step (and I love the look of it). Feed our curiosity!