New: Jaws of the Mississippi

Jaws of the Mississippi (US; dir. Griff Furst) is about a radioactive shark -- and, though big, it may not be unusually so. 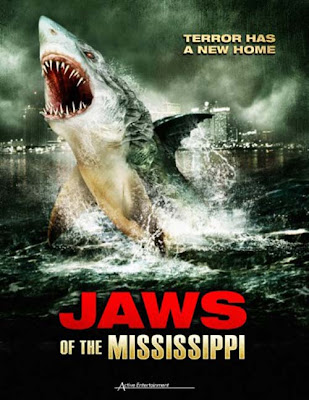 A massive hurricane devastates the Gulf of Mexico, with it a US government’s top-secret anti-bioterrorism facility. When one of its highly radioactive chemicals spills into the ocean, it triggers mutations in a great white shark, enabling its adaptation to survive in freshwater. As this shark wreaks havoc on local Mississippi River towns, it poses the additional risk of spreading this radioactive material and contaminating the entire freshwater system of the United States. Local fisherman Ward and his hillbilly crew are secretly hired to hunt down this shark, and when they find it threatening a group of teenage boaters, Ward must face his troubled past to save these kids and prevent further catastrophe.

The film is "coming to video" (presumably DVD) soon, from Active Entertainment.

Posted by Undead Brainspasm at 6:16 PM