As if a novel that turns Jane Austen's Pride and Prejudice into a zombie story isn't weird enough, Variety reports that Elton John's Rocket Pictures plans to make Pride and Predator -- a film that dumps the iconic alien hunter into the Jane Austen milieu.

It will be directed by Will Clark. 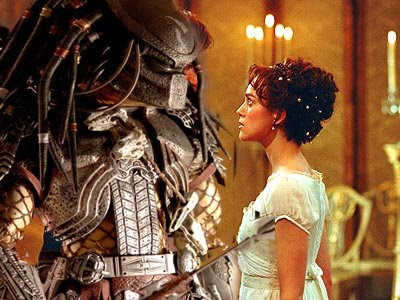 It felt like a fresh and funny way to blow apart the done-to-death Jane Austen genre by literally dropping this alien into the middle of a costume drama, where he stalks and slashes to horrific effect.

Is this for real? Well, why not? As surprising as it seems, stranger things have happened. Is it a comedy? I guess we'll find out sooner or later.

Now that's movie I definitely have to see! It dosen't matter it's bad, you just can't stop from watching such a great idea :)) And no, I'm not working for Asylum :))