In 2007, after a low-budget construction effort that took place in the shadow of Michael Bay's blockbuster sci-fi epic, Transformers, Asylum gave us the lower-budgeted Transmorphers (directed by Leigh Scott) -- giant robots and all. Truth told, apart from the echo of the title and the big gizmos, the two films weren't overly similar. 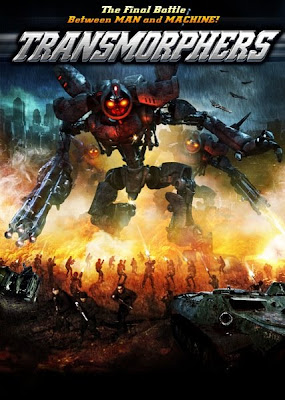 Now the infamous exploitation company is in post-production of a sequel -- Transmorphers 2 (directed by Scott Wheeler) -- which, in turn, doesn't seem to bear any real relationship to Transformers 2: Revenge of the Fallen, plot-wise. It stars Bruce Boxleitner (of Babylon 5 fame), Jennifer Rubin, and Shane Van Dyke.

In this present day prequel, the robot invaders attack the Earth, forcing a small band of humans to seek refuge below the surface of the planet.

Anyway, producer Paul Bales has sent us this exclusive stunt footage from the film.

Posted by Undead Brainspasm at 3:00 PM

Are you sure that Boxleitner is in Transmorphers 2? IMDB.com doesn't have him listed as being in it. Seems a little low for him, being that he's still getting work doing Tron 2.0 and a Babylon 5 movie that came out in 2007. Of course, if I were in Transmorphers 2, I wouldn't own up to it either!

He's in it according to the Asylum website -- and there's even a picture. I didn't post it as it was a bit small.