No, not another official Terminator sequel, but the new shadow-film from low-budget, direct-to-video genre studio Asylum. 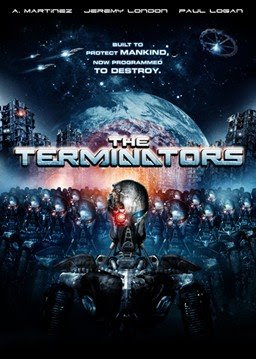 A small band of resistance fighters battle the cyborgs that have taken control of the planet.

Here is a production image, showing one of the robots: 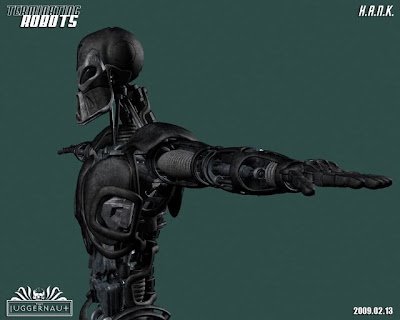 You can see more here.

Asylum has become infamous for producing shadow versions of upcoming blockbuster films -- or even simply mirroring current trends in their latest releases -- and is often severely castigated by fans for doing so. But there has always been such studios inside and outside of Hollywood. It's known as exploitation filmmaking. Presumably they have a large team of lawyers to define the edges of legal acceptability, though as we all know ideas can't be copyrighted -- only the specific forms those ideas take. The makers of Terminator and the highly successful franchise that sprang from it don't own the idea of rebellious cyborgs and robots, nor did they invent it. One of Hollywood's most influential director-producers, Roger Corman, knew this -- and knew as well that exploiting current pop trends and taking advantage of existing markets by quickly producing films that draw on those trends was a great way to make money. Which he did.

And it didn't stop him from making some great films in the process.

I'm not sure Asylum has produced any "great" films, but their technique of shadowing the box-office biggies by way of direct-to-DVD quickies doesn't preclude their films from being entertaining.

The Terminators will be released in April.

Posted by Undead Brainspasm at 7:49 AM