Brendan Fraser's dino vehicle Journey to the Center of the Earth (2008) is about to turn into a franchise, with an unusual take on the way to do it. 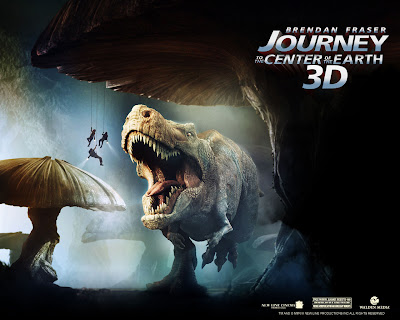 Click on this image to make it wallpaper size
New Line have announced the sequel, which will be directed by Eric Brevig and will once again be in 3D. The actors -- Brendan Fraser, Josh Hutcherson and Anita Briem -- are expected to reprise their roles from the first film, though this has not been confirmed.

As yet the sequel has no title, but the proposed plotline came about when an earlier concept that featured Atlantis was abandoned (due to a plethora of Atlantis projects already in development) and producers stumbled upon a spec script by Richard Outten, titled "Mysterious Travels". This one is an adventure tale "based on the fantasy conceit that the literary tales Gulliver's Travels, Treasure Island and Verne's own Mysterious Island all occurred on the same island." It will be "re-purposed" to fit the idea of a sequel to "Journey", something that Verne himself never attempted.

More dinosaurs. Yay! You can never have too many.

Posted by Undead Brainspasm at 10:19 AM

Labels: alien dinosaurs, brendan fraser, journey to the center of the earth, sequel