New: Terror from Beneath the Earth

Another low-budget independent 1950s monster flick pastiche -- The Terror from Beneath the Earth (US-2009; dir. Christopher R. Mihm). 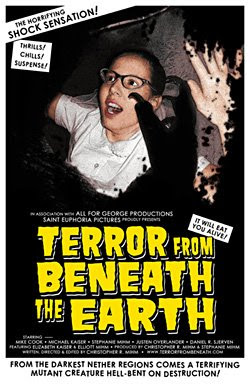 After years of underground atomic testing, one of the animals living within the Wisawa caves (a system that stretches from Phantom Lake to the Deadlands) has undergone a radical and unimaginably horrible transformation! While exploring the caves, Dr. Vincent Edwards (Mike Cook) and colleague Rosemary Bennett (Stephanie Mihm) stumble across evidence in the disappearance of local children. After reporting the find to the local sheriff, Dr. Edwards and Rosemary are tapped to lead a rescue attempt. Along with the sheriff and small-town farmer Stan Johnson (the children's father), the rescue party quickly comes to the realization that if the caves don't get them, whatever unseen terror lurking in the shadows just might!

Posted by Undead Brainspasm at 4:19 PM

Labels: 50s pastiche, independent, terror from beneath the earth