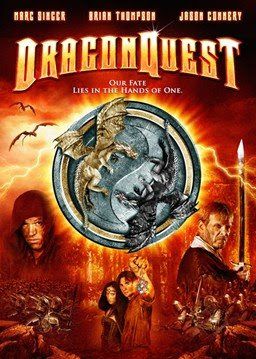 When an ancient warlord summons a mythological beast, a young hero must complete a series of quests to awaken the dragon that will defeat the monster.


I wonder if the burning monster was inspired by the climactic sequences of Outlander, where the alien "dragon" burns while still being feisty.

Source: The Asylum website via Avery
Posted by Undead Brainspasm at 7:19 AM

Haven't seen Outlander. Is it any good? I did watch a bunch of dragon movies over the past year as I ended up doing two dragon movies.
The original concept for DragonQuest called for the dragon to be a smoky, firey elemental dragon. So we tried to go for that.

The film looks like a blast Mark! Can't wait to see it. By the way; "Outlander" is a must see as it was excellent! Thanks for visiting our site.

Yes, I echo Avery's sentiments, Mark. Thanks for dropping by. "DragonQuest" seems to have a less straightforward, and hence more interesting, plot than some of the other low-budget dragon flicks I've watched lately. I, too, look forward to seeing it.