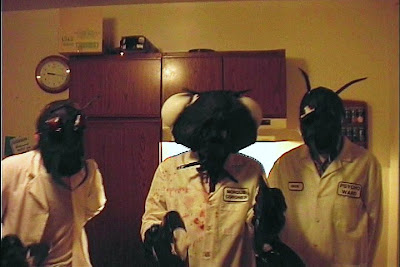 In his lifelong pursuit of low-end independent monster flicks, Kaiju Search-Robot Avery happened upon a pair of films, Thoraxx and its sequel, Thoraxx II: The Breeding. It was touted as "the World's First Giant Bug Hillbilly Musical". Inevitably intrigued, he got in touch with one of the directors, Jason Butler, and asked him how to get a copy. Jason replied:

Thoraxx II: The Breeding does not have distribution or anything like that. Pretty much the only way to get a copy is to email me! The film was released in 2003, it has a run-time of 100 minutes, and the directors are myself (Jason Butler) and my friend Mark Peaslee. The first Thoraxx has a run time of about ten minutes, was completed in a one-day shoot in April of 1999, and didn't really seem to warrant a trailer. The first Thoraxx is included on the Thoraxx II DVD.

The film is very low-budget, very goofy, and the bugs were mostly made out of things we had laying around. But, it is a musical, and I think it's pretty entertaining. I'll leave it up to you whether the audience for your website would agree.

Since Thoraxx II we've been working on a series of werewolf movies titled Werewolf Cemetery. There will be four films when we're done, totaling about five hours (I'm still working on the editing). It's also largely a comedy, but also an epic tragedy, an action movie, and a black-and-white homage to the great films of the past especially The Wolf Man.

Also we have a film about a really crappy superhero titled The Adventures of the Screaming Ape. Not exactly a giant monster movie although he has a rather monstrous personality. 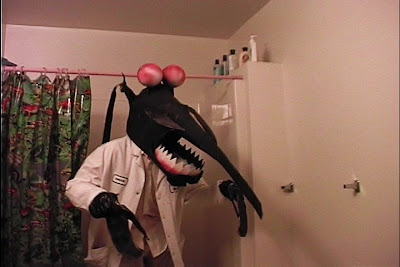 The Backbrain will be reviewing the Thoraxx films in due course, but in the meantime here's the trailer for Thoraxx II: The Breeding.

Posted by Undead Brainspasm at 4:42 PM